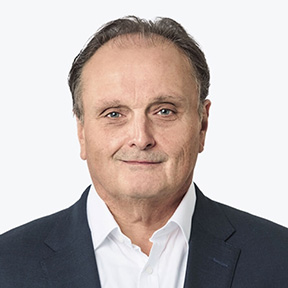 Jerry Rhodes leads Dental Care Alliance (DCA) as its Chief Executive Officer. DCA is one of the largest multi-branded dental support organizations in the country, with more than 300 affiliated practices in 20 states. In September 2015, Jerry joined DCA as a Member of the Board of Directors and became the leader of the dynamic and rapidly growing organization two years later, in August 2017. He has over 40 years of experience in and contribution to improving the health and overall well-being of others.

Before joining DCA, Jerry was the Chairman of BayMark Health. In response to the growing opioid epidemic in the United States, BayMark Health offers comprehensive treatment and counseling to those both directly and indirectly impacted by the fight against substance addition and abuse. He has also served on the respective boards of several major multi-site, behavioral healthcare-focused organizations.

Prior to joining CRC, Jerry was the Chief Executive Officer and co-founder of Comprehensive Addictions Programs (CAPs). CAPs was a privately-held company, backed by several venture capital investors, which under Jerry’s leadership, became a national, full-service addiction treatment provider with 18 specialized, addiction treatment programs. CAPs was truly a pioneer in identifying the burgeoning opiate epidemic, and the development of medication addiction programs to respond. Comprehensive Addiction Programs was acquired by CRC Health in February 2003.

Before co-founding CAPs, Jerry held several roles focused on development in the long-term healthcare industry. He served as the Director of Development for Beverly Enterprises, which was, at the time, the nation’s largest publicly held nursing home company. Prior to his position at Beverly, he held several business development roles at Manor Care.

Jerry serves on the Board of Directors for myriad healthcare services companies, as well as major private equity firms including Springstone Hospitals and National Spine and Pain. In addition, he has served on the boards of several major associations in the behavioral and addiction fields.

He was awarded the prestigious Nyswander/Dole “Marie” Award from the American Association for the Treatment of Opioid Dependence (AATOD) for his impressive work in the field in 2013.

Jerry is committed to helping deliver leadership and thoughtful continuous improvements that further the overall health and well-being of those that he has the privilege to serve.