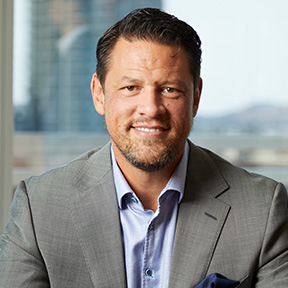 Lamonte Jensen attended Weber State University in Ogden, Utah where obtained his undergraduate degree in Psychology. After graduation, he became an Infantry Officer in the Marine Corps completing multiple combat tours in Iraq. Upon leaving the Marine Corps he earned his MBA from the University of Chicago with a focus on Strategic Planning and Entrepreneurial Finance. LaMonte’s first post-MBA job was as a strategy consultant at McKinsey and Company. Since leaving McKinsey and Company Lamonte has held leadership roles at multiple venture and private equity-funded technology and service companies. One of Lamonte’s last technology roles prior to co-founding Gen4 Dental partners was as the Vice President of Customer Success for Spear Education’s consulting branch where he lead a team of practice consultants and built an integrated service model.

Lamonte is passionate about building high-functioning teams and creating an environment where people flourish. He enjoys the collaborative process and being around the best and brightest. He is excited to build a world-class organization in dentistry. During his free time, he enjoys spending time with his children, traveling, and doing Brazilian Jiu-Jitsu.